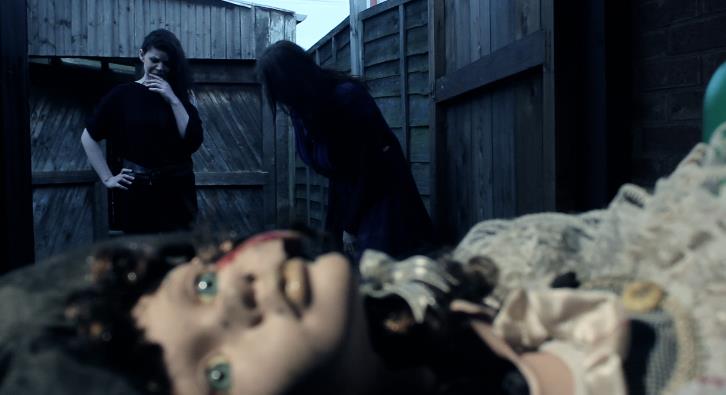 Emily E. Bibb and Chris Jay, the duo behind upcoming UK horror Porcelain Presence, catch up with The Horror Hothouse‘s Emma Knock to discuss their inspirations behind the film and revamping Breaking Bones Productions.

Hi Emily and Chris, thanks for chatting with us about your upcoming film. Firstly, can you give us a little background on Porcelain Presence?

Chris Jay: Porcelain Presence is psychological thriller set in a nosey town called Wickery Dene. Every neighbour in this town harbours a secret, particularly Brian and Anna who hold the darkest of secret, that is until one day their secret is discovered which leads to a shocking murder. The three women involved in the murder, must then try and cover up the death before someone founds out and suspects they were involved, the question is, will they be able succeed when in this town, because in this town, nothing stays secret for long…

What was the inspiration behind the film and how did both of you and Nicholas Mills (co-writer) come together to work on Porcelain Presence?

Emily E. Bibb: I had the idea for Porcelain Presence a few years back, (although it has changed a hell of a lot!) I wanted to create a thriller that kept people guessing the whole way through, something very tense, so when I met Chris we put both our minds together and moulded it into the story we have today. The idea of the dolls though, came when we were searching in Chris’ garage for some props for a short film we were working on – we found a doll with a foot missing, we looked at this really grubby looking doll and knew it had to go in the film – we considered how to get dolls into the film and make it even more creepy, – and how creepy it would be if a brother and sister were obsessed with dolls long into their adult life – and it just kind of stemmed from there really.

How long has Porcelain Presence been a ‘work in progress’?

CJ: A couple of years, it has taken a while to mould the idea together, to what it is now, so it’s been an on-going process. We have quite a lot of people who really want to see the finished product, but we’re perfectionists and want this film to be the best so we are spending a long time on it. What’s the point in releasing a film if it’s not the best it can be?

The film is 100% self-funded, which must be quite a task. How have you found that process?

CJ: It has been so difficult; sometimes we sit there and think: “how are we doing this?” We have learnt so much through doing this and we’re still learning now. I have personally found it quite a struggle, there is always so much to do, so many tasks it can be very challenging.

EB: I agree with Chris – it’s been insanely difficult… we’ve been working full time and we don’t get a lot of breaks, it’s out of work, onto producing Porcelain Presence – but sleeps overrated, right? We’re getting to a point now when we’ll soon be able to fund the last couple of locations, so hopefully not too long till we can release our official trailer!

You have both been across all aspects of the film creation process, from directing to writing and producing, which aspect have you enjoyed the most?

CJ: I have found a new love for writing to be honest, it’s been great! I also have really enjoyed all aspects of the directing and creative process to making the trailers and creating posters.

EB: I would probably say writing too, because I love to get inside the characters heads, and create their own little world – the fact that there are pretty much no limits (apart from budgetary ones haha) Also have loved producing and marketing the film.

At points the plot focuses on the abusive relationship of a long-suffering wife and her psychotic husband, which is a very sensitive issue. How did you approach it?

CJ: I think at the beginning we approached it quite delicately as we wanted it to come across as realistic as possible, we didn’t want it to always be violent and in your face, but focus more on how manipulative Brian is and how he uses his power to control Anna. The actors play both parts brilliantly so as time went on, we wanted to make the relationship appear more sinister, the abuse side focuses a lot more on the emotional side rather than the physical side, but there are some quite disturbing moments that we hope the audience will appreciate.

We know you’re still in the midst of filming, but what are your aspirations for Porcelain Presence once it’s complete?

CJ: More than anything I hope the film is received well. We have spent a long time and put a lot of hard work into the film, coming from nothing with little money has not helped the situation but we have made the best of what we can. I just hope that we can receive the support we need to make this film a success.

EJ: We will be taking Porcelain Presence around the festival circuit, so we hope it will do well there – that and being released on DVD, however we will keep everyone updated on various all aspects of this – on our Facebook page and our blog.

What can horror fans expect from Porcelain Presence?

CJ: I think horror fans can expect high drama, tense sinister moments, and shocking revelations! While the film doesn’t focus on blood or gore, I certainly think those fans who appreciate the psychological side of horror will be satisfied. The film gets you questioning and you never know what to expect, anything can happen and I think that’s what makes horror films so enjoyable to watch, unpredictability.

Have you sought any inspiration from any well-known horror films?

CJ: In a word, no! We haven’t gone for the standard horror narrative or taken much inspiration from horror films and the reason I say that is because we didn’t want the film to reflect the bog standard genre that was predictable and, although the film isn’t horror per say, there are definitely some horrifying moments that I hope will have the audience glued to their seats! It’s pretty disturbing overall.

If you could work with anyone in the film industry who would it be and why?

EB: There’s actually so many to name them all, but if I had to pick one I would probably have to say Tim Burton as he’s got such a unique vision, the characters and the stories he creates are so bizarre and imaginative, that I would love experience working on his films!

Does Breaking Bones Productions have any other projects in the pipeline?

CJ: Breaking Bones Productions is always thinking of other opportunities and projects to work on, we both have some ideas but we really haven’t had much time to focus on those yet with Porcelain Presence. We have recently revamped and changed our production name, we’ll be revealing all as soon as we can, so watch this space…

Do you both now have an intense fear of porcelain dolls after working around them for so long?

CJ: Nope! Haha, if anything they have become less scary, although saying that… I probably wouldn’t want to stay in an empty house with just those dolls staring at me!

EB: Haha, people often say that – we’d be in a horrific situation if we did have an intense fear of them, because at one point or other whilst working on the film, I think we’ve all had to sleep in a room full of them.

Finally…what are your favourite scary movies?

CJ: I’m actually a hard person to scare. I don’t generally scare easily. I prefer the creepy ones, with elements of mystery to them, ones that are unpredictable. Those movies in my opinion are few and far between! I’ll let you know when I’ve come up with a list; it’s going to be difficult to decide though…

EB: It’s not until recently that I can actually tell you my favourite scary movie… I won’t tell you why, but you need to watch Guillermo Del Toro’s The Orphanage – The film’s in Spanish, but don’t let the subtitles put you off, you get so drawn into the film you won’t even realise you’re reading them!

Check out the trailer and read our preview here.

One thought on “Porcelain Presence: Q&A with Emily E. Bibb and Chris Jay”